Head of the programme and lead 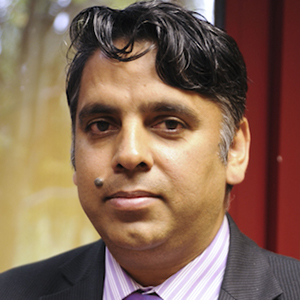 Prof Amjad Parvaiz is a colorectal surgeon with special interest in rectal cancer surgery. He is currently the Head of Minimal Access and Robotic Colorectal Surgery. He graduated from King Edward Medical College Lahore in 1992 and did his surgical residency in South Africa spending time in very busy trauma units in Johannesburg and Petermaritzburg from 1994 to 1998.

He completed his FRCS in 1998 from Royal college of physicians & surgeons of Glasgow and arrived in England in 1999 to finish his specialist training in General and colorectal surgery. He successfully completed intercollegiate FRCS exam in 2005.

His rotations at Basingstoke for two years ignited his interest in rectal cancer surgery and he worked very closely with Brenden Moran and Bill Heald to learn the principles of TME surgery. He was also awarded the prestigious National laparoscopic colorectal fellowship at Colchester with Prof Roger Mortson. His other mentor for laparoscopic colorectal surgery includes Prof Robin Kennedy whom he spend over two years at Yeovil, Somerset.

He was appointed as consultant colorectal surgeon at Portsmouth Hospital trust in Sep 2006. He developed Laparoscopic colorectal surgery at Portsmouth and within six years of practice the laparoscopic rate for colorectal cancer resection rate became over 90% (Highest in the country). Portsmouth also became National Centre for Training in laparoscopic colorectal surgery. Prof Parvaiz was responsible for training the highest number of consultant trainees within the programme with Portsmouth Centre doing 22% of National work during this time. Due to his excellent outcomes and huge contribution to teaching and training, he was appointed as Professor of Surgery in June 2011 at the Faculty of science University of Portsmouth.

The National reported data for individual surgeon outcomes for cancer resection has been published for the last three years in England. Prof Parvaiz has got the highest number of cancer resections with 0% mortality. (Best figures in the country).

His interest in Teaching has led him to develop teaching programmes for numerous countries including Russia, Iran, Kenya, Turkey, Pakistan, Poland, Portugal and Denmark.

He is responsible for creation of European Academy of Robotic Colorectal Surgery and he is the co-Director of this project, which was launched in January 2015. His research work has been published extensively in peer review journals. He is author of various book chapters and has supervised higher degrees at the university of Portsmouth.