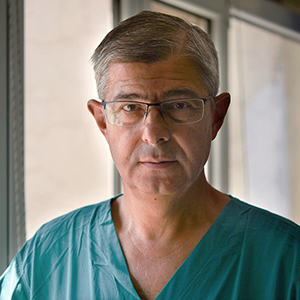 Dr Janić is chief of coloproctology at surgical department General Hospital in Pančevo. He has finished specialisation in general surgery at Belgrade University in 1992, and he has taken his subspeciality in digestive surgery with prof D. Kecmanović at I Surgical Clinic in Belgrade in 2001. He has finished postgraduate course at St Mark’s hospital in London in 1997. As visiting surgeon, he was guest in Tokyo National Cancer Center , the Cleveland Clinic foundation, MD Anderson Cancer Center, Memorial Sloan-Kettering Cancer Center, National Research Center of Surgery, Moscow. In 2002 he has become director and founder of Pančevo Surgical Workshop, at which live surgery and lectures have been given by leading world experts in the field of colorectal surgery. Since 2013 he is practicing laparoscopic colorectal surgery under supervision of professor Amjad Parvaiz. In total, he has done more than 130 laparoscopic colorectal operations.