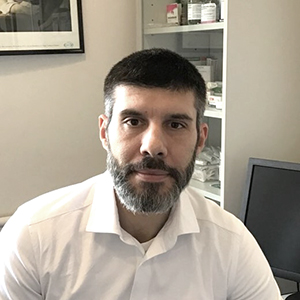 Damjan Slavkovic is a general surgery specialist at the Clinic for General Surgery of the Military Medical Academy in Belgrade, where he completed his specialist studies in 2009.

Since the completion of his specialization, he has been intensively dealing with colorectal surgery, proctological, gastric and laparoscopic surgery. From 2014 to 2015, he was permanently employed as a surgeon specialist in Germany, at the Kreisklinik Guenzburg Hospital, at the Department of Minimally Invasive and Visceral Surgery, where during 2012 he was trained in the field of laparoscopic colorectal surgery.

His experience and knowledge in basic and advanced minimal invasive surgery (laparoscopic colorectal surgery as well as laparoscopic surgery of benign diseases of the upper digestive tract) transmits in the daily work of young surgeons and doctors on specialization.